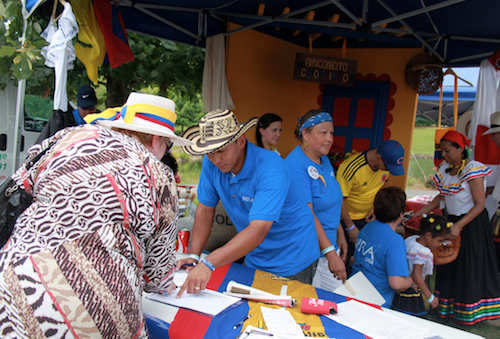 Charlotte, NC – Under a hot summer sun, a group of Miraists participated in the Ninth Colombian Festival in Charlotte, with the “Paisa Corner” which was a sensation at the event that attracted more than 10,000 attendees.

The festival was held for the first time at Symphony Park of South Park Mall, on Sunday July 21st where yellow, blue and red where the predominant colors to celebrate the 203 anniversary of the independence of Colombia.

Dressed in the traditional customs of the coffee region, several Miraists were all day posing with visitors who having seen the creative decorations could not resist having a picture taken as a souvenir.

The stand assigned to MIRA USA was at times crowded with people attracted by the Colombian corner, while other Miraists used this time to collect signatures from Colombians to support the campaign “Passport for All”.

The Miraists also won a contest of Colombian traditional customs held by the organizers of the festival, who at the end thanked MIRA USA for their outstanding participation.